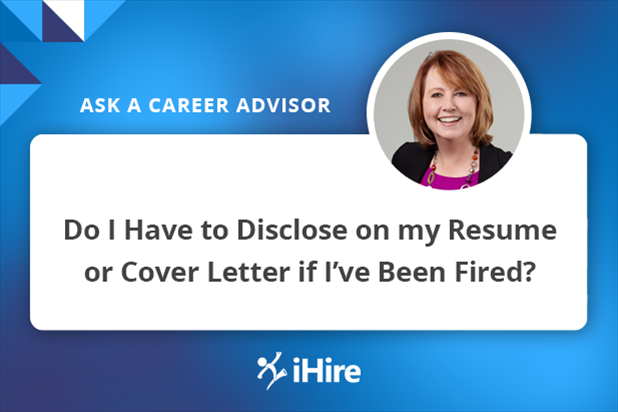 Ask a Career Advisor: Do I Have to Disclose on My Resume or Cover Letter if I’ve Been Fired?

You might be wondering, “Do I have to disclose being fired to a potential employer?” If so, is there a specific way to state why you were fired on the resume or cover letter? We asked our in-house expert and Career Advisor, Lori Cole, what she had to say on the matter.

“Regardless of the reason you were let go, you should disclose being fired,” she confirmed. “It’s never a good idea to lie or leave that information out. However, in most cases, it is not necessary to state that you were fired on a resume or cover letter.”

Think about it: Your resume contains start and end dates for your previous positions but never details why or how you left. You wouldn’t put “quit” on your resume, so why put down “fired”?

As far as your cover letter is concerned, the sole focus should be on selling your skills and experience. Including any negative information or the words “let go” could result in your cover letter being tossed aside.

“The best approach in this scenario is to let the prior termination come up naturally in the interview, and be prepared to talk about it,” Cole suggested. “There’s no reason to draw attention to the situation before you’re given the opportunity to explain yourself and prove to hiring managers that you are still a desirable employee.”

As with any interview, you’re likely going to be asked why you left your last role. However, keep in mind that how you approach the matter will be far more important to hiring managers than the actual reason you were let go.

Your next great opportunity awaits. Register with iHire.

Plan what you might say, jot down a script, and practice. Then, when you’re ready to provide your answer, keep a positive attitude, talk about what you’ve learned from the experience, and highlight things you’ve accomplished in the interim.

A prior termination will likely never be the reason that an employer rejects your application. Practice answering other common interview questions, dress for success, and prepare to impress employers – regardless of a prior termination. 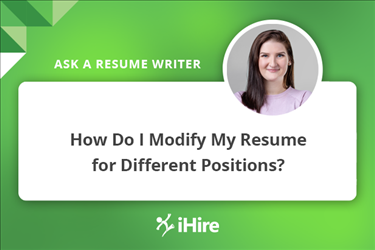 Ask a Resume Writer: How Do I Modify My Resume for Different Positions?

Are you tailoring your resume for each application? Sidney Green, Certified Advanced Resume Writer at iHire, reveals 3 simple steps you can take to keep your resume out of the black hole.

How to Become Someone’s Referral

Top 4 Benefits to Look for in a New Job

Ask a Career Advisor: Why Am I Not Hearing Back from Employers?